Things going on in the Spiral

Working around in the spiral from finishing up Wintertusk and Grizzlehiem on all my wizards while collecting for reagents to craft the items for my wizards and getting the new spells and pets. Just as I finish Nastrond there is another wizard who hasn't even touched a Grizzlehiem related quests. It's a lot of gaming time and patience but it's fun :). Pet-a-palooza is still going on but not for long so make sure to take advantage of the sales and the KIFreeGames mini games and those mega snack packs that they give.

They have recently released two awesome items which I know you all know about. One of them is the new Mega Bundle which you can buy at your local Gamestop for only $39!
Directly from the Wizard101 site:


This Double Card comes with:
*If you already have three houses on your character, you must claim this elixir before you claim the Castle! 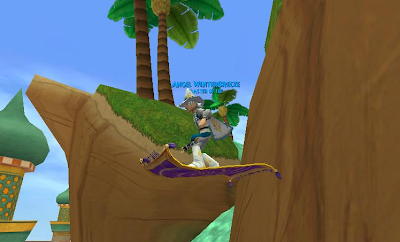 Now the best news of all is the Ravenwood Ball that will be held on June 25th! Make sure to check out Diaryofawizard.com for more details and to enter in some awesome prizes they are giving away to celebrate their 2 year anniversary! Last year it was loads of fun and was packed with some very interesting and amusing wizards and hope to see more of them this year. Also make sure to register for DiaryofaWizard Connnect X and add me while you're there! :)
Posted by Angel Winterbreeze at 6:44 PM