Happy Easter! Or soon to be Easter. The new items in the Test Realm have been transfered to the Live game in case you have been living under a rock :). The new items include new Secondary school amulets which let you use your power pips for one other school. I think these amulets bring some different strategies into play that were thrown out before because of the lack of pip efficiency.

Many arguments have been made against these amulets in both PvP and PvE. I've seen that some people complain that these amulets make PvE too easy. Well, isn't that the purpose of crown gear to make the game easier and more efficient? Then there is the other argument of slapping on the 'NO PVP' tag on it, this one I am not against it, but I'm not for it. I've tested and watched their effectiveness in PvP, and Balance by far benefits more from these amulets because they are so 'flexible' which means Balance benefits from any school it chooses as a secondary school with these amulets. HOWEVER, those Quad ice teams pose a bigger problem.  They could chain stun WHILE stacking blades for the one hit KO with Frost Giant or Snow Angel. I think Vaporize will come in handy now(Dispels next outgoing Myth spell).

They also released something else in the Spiral, yes Mini Game Koisks are now in the crowns shop BUT I'm talking about the awesome Bunny suit! Some Twizards had some fun yesterday in the bunny suits :) and again, THANK YOU FALLON! for my Bunny suit!  Here are some pictures yesterday while we were dancing yesterday, unfortunately some Gobbler and Trolls were hanging around in that area so the wabbits had to take care of business. 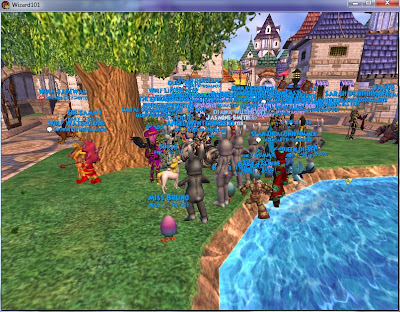 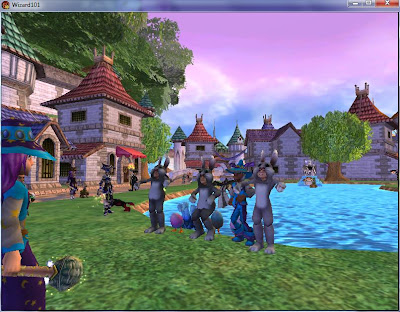 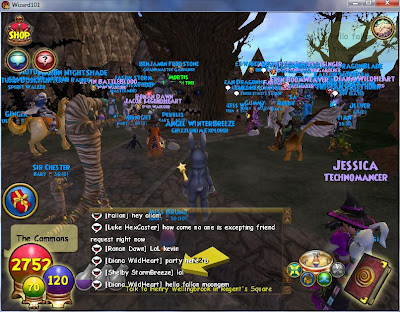 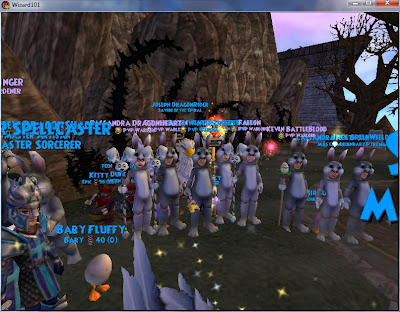 Posted by Angel Winterbreeze at 5:33 PM